Sonic drill and Sonic drilling have a lot of Advantages compared with Conventional drills and drillings, which create a lot of Benefits for Sonic users.

The head contains the mechanism necessary for rotary motion, as well as an oscillator, which causes a high frequency force to be superimposed on the drill string. The drill bit is physically vibrating up and down in addition to being pushed down and rotated. These three combined forces allow drilling to proceed rapidly through most geological formations including most types of rock. Additionally the air damper is also incorporated in order to confine the alternating forces to the drill string. 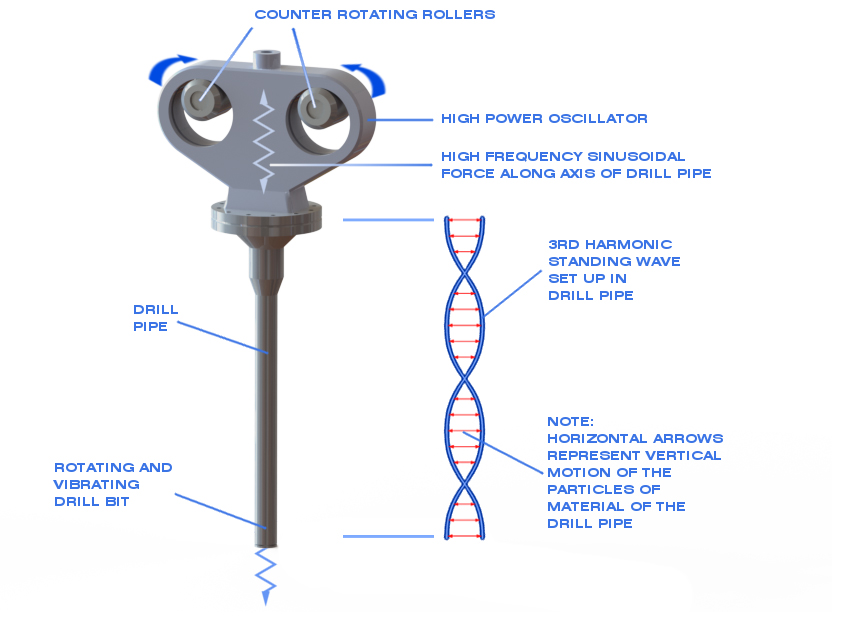 +
In overburden, the vibratory action causes the surrounding soil particles to fluidize, thereby allowing effortless penetration. In rock, the drill bit causes fractures at the rock face, creating rock dust and small rock particles, which facilitates advancement of the drill bit.
+
In many instances the drilling and coring of rock and earth can be accomplished without the use of any drilling fluid whatsoever. This is an important requirement for environmental drilling projects. Compressed air, drill mud, or plain water can be utilized to remove the cuttings and speed up the operation further, depending on the application that the machine is used for.
+
Due to the mechanisms to create the vibration force and to transmit it to the drill bit, the noise is quieter than the one of Hydraulic Rock Drill, DTH or so. The patented Air Damper also contributes to the noise reduction. Furthermore a sonic drill head of SONIC-NEO equips Silent Proof Cover around.
+
Basically the heavy weight on bit is not important to sonic drilling while the rotary drill requires it. Too much weight on bit effects unnecessary borehole deviations. For sonic drilling, since the combined forces allow drilling to proceed rapidly, there are less chances to occur the borehole deviation
+
Sonic drill and sonic drilling can be used for a lot of drilling applications. The capability of SD-100 (33K) drill head to drill horizontally and the compact size expands the usage. Here are some examples.
Geothermal installation hole drilling, Environmental investigation, Anchor and Grout hole drilling, Piling, Water well drilling, Blast hole drilling and so on.
Optionally rotary drill head for diamond coring can be installed beside sonic drill head. Then the drill unit will be more

+
Due to the advantages such as Faster Drilling Speed and Capa bility to Drill and Case the Hole Simultaneously, you can complete the project in shorter period compared with the one by conventional drilling method.
+
Our sonic drill equip Drill Head Tilting System, Hydraulic Rod Breaker and optionally Hands-Free Rod Handling System. These devices translate to Labor Saving and Safer Operation.
+
Some of the most valuable things are Time and Manpower. As a result of the use of our sonic drill, it is able to shorten the work period and save the labor. The advantages of sonic drill and sonic drilling will be more profitable in the near future.
+
In some projects, only our sonic drills can pass the regulations, be allowed to enter some job sites and complete the projects. The required equipment and tools are minimized thanks to the advantages and the drilling capability of our sonic drills.
Also the versatility gives the sonic users more opportunities to get more jobs.
+
Environmental interests have been always discussed in this drilling industry and should be focused on furthermore in the future. The capability to drill dry or with smaller amount of circulation fluid and mud contributes to the one of solutions. Low Noise may be the one as well.
+
The patented sonic drill is outstanding in its ability to provide continuous, highly representative, relatively undisturbed core samples through most geological formation including boulders and bedrock through a combined forces of Rotation and Vibration.
+
Due to the capability to core dry or with a small amount of circulation fluid, the waste can be reduced by up to 80%.
In accordance with our policy of constant improvement, we reserve the right to amend design, materials, specifications and prices at any time without prior notice.
Drilling capability varies according to many factors. The introduced drilling capability and customers feedbacks on the website are only examples and these are not guaranteed.